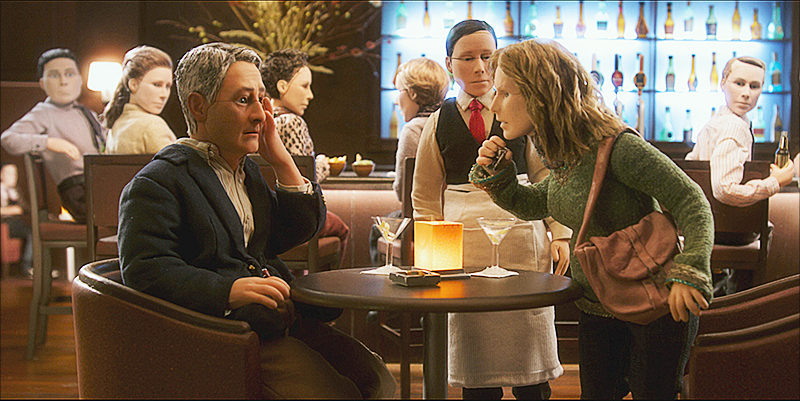 The latest feature from the curious imagination of Charlie Kaufman is a low key drama on loneliness and disconnect in the vein of LOST IN TRANSLATION. Naturally though, being from the mind of writer of BEING JOHN MALKOVICH, ADAPTATION and ETERNAL SUNSHINE OF THE SPOTLESS MIND, it’s also presented as stop motion animation.

David Thewlis (NAKED, the HARRY POTTER series) voices Michael Stone, a customer service guru visiting a Cincinnati hotel to promote his latest book. To the depressed Michael, everyone in the world - including his wife and son - looks and sounds exactly the same, voiced by Tom Noonan (MANHUNTER, HEAT), until he meets the shy Lisa (voiced by THE HATEFUL EIGHT’s Jennifer Jason Leigh) and immediately becomes infatuated.

Co-director and stop-motion specialist Duke Johnson has forged outstanding work with the imperfect-bodied models, and Kaufman’s script houses a number of great ideas and moments. Some of the most intriguing ones however, are left frustratingly underexplored - particularly egregious when the film begins to feel overlong (unsurprisingly, it began life as a much shorter creation). Nonetheless, Thewlis fans will be comforted to know that yes his character is, however briefly or partially, decapitated.

ANOMALISA is released December 30 in the US, February 4 in Australia, and March 11 in the UK