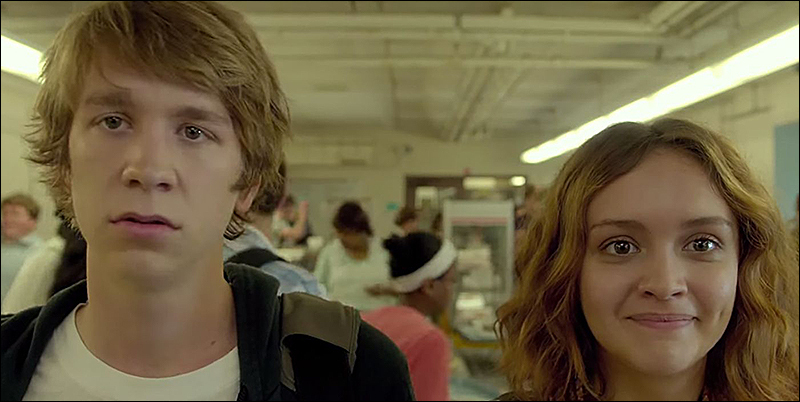 The good news is Rachel (Olivia Cooke) - the titular dying girl in Alfonso Gomez-Rejon’s adaptation of Jesse Andrews’ novel – is not a manic pixie dream girl (although she is used as catharsis for Thomas Mann’s Greg – the ‘me’ in said title). The bad news is she might be the only thing in ME AND EARL AND THE DYING GIRL that isn’t. Welcome to manic pixie dream world.

Here high school kids can afford loads of Criterion DVDs and have tons of spare time to be inspired by them, because they apparently don’t need part time jobs to pay for these movies (which, trust me, are actually really bloody expensive). Meanwhile Greg’s father (Nick Offerman) seems to have the similar luxury of wandering around the house in a kimono all day and occasionally cooking exotic Asian food. It’s quirk for quirk’s sake – or worse, it’s quirk calculated and engineered so that the film will be noticed by someone important at Sundance or South By Southwest.

The string of clichés involves introvert high school film geek Greg (with a convenient appreciation for world cinema developed well beyond his years) is forced by his mother (Connie Britton) to visit Rachel, who has recently been diagnosed with cancer. Apparently this will make at least one of them feel better. Despite an awkward start, a genuine friendship develops, and they must both confront Rachel’s impending death. Greg and best friend Earl (RJ Cyler) hit upon the idea of making a special short film just for her, but Greg struggles to find inspiration, and to express it.

There are moments that work, but usually only in fits and starts than anything overarching or consistent – some of the relentless quirk lands (the quiet appearance of a low budget, home-made version of Errol Morris’ Interrotron to interview fellow students for a tribute video is a particularly nice touch) and the sweded, pun-titled short films raise a smile, but more often it just feels like a compilation of ideas that have been done before and better, and that the performers – particularly Cooke - are better than the material they’re working with.

ME AND EARL AND THE DYING GIRL is released June 12 in the US, September 3 in Australia and September 4 in the UK.