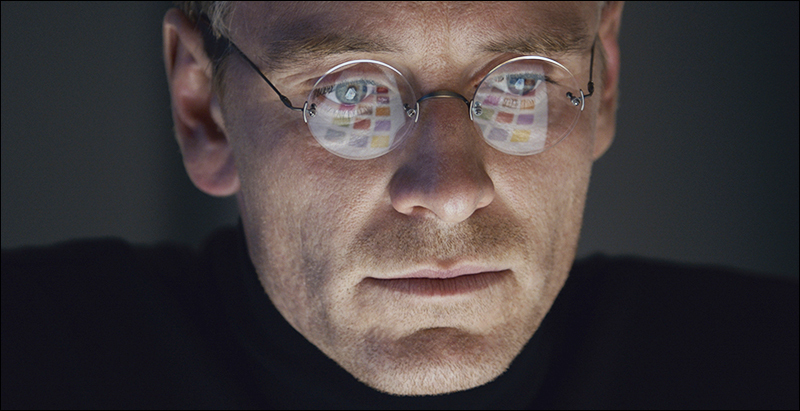 Danny Boyle’s STEVE JOBS – the God-knows-how-manyeth-film centring on the Apple cornerstone – strangely doesn’t feel much like a Danny Boyle film at all. That’s because (and this is where your appreciation for the movie will either wane or skyrocket) it feels like an Aaron Sorkin film: this is The West Wing’s IT Crowd (minus laugh track, and laughs), if you like.

When he’s on form, I’m a big fan: that seminal TV series, A FEW GOOD MEN, THE SOCIAL NETWORK and especially MONEYBALL all remain a pleasure for me to watch, so I had no problem with the trademark wall-to-wall dialogue, nor with what is essentially a ‘stage play on screen’ feel from Boyle’s subtle approach; the director who managed to make 127 HOURS (man trapped alone by small boulder) thrilling, absorbing and brimming with style seems content to be almost invisible here, and when visual flourishes do appear (a rocket taking off is superimposed on a hallway wall at one point), they are almost jarring for being too few and far between. It’s unusual, but never offensive.

Fortunately for some, they’ll barely notice any of this for the meaty drama, strong performances, and of course that dialogue. Structured as anything but an honest, straightforward biopic (which drove Joshua Michael Stern’s Ashton Kutcher-led JOBS down several snoozy holes), Sorkin’s screenplay aims far higher, morphing recurring key moments of Jobs’ life into three acts, represented as the backstage preparations three key product launches: the Macintosh (1984), his failed NeXT system (1988), and the iMac (1998).

Naturally the action centres almost completely around Jobs himself, flawlessly anchored by Michael Fassbender (INGLOURIOUS BASTERDS, the recent younger Magneto in X-MEN), who nails the incongruence of the guru’s personality perfectly; so in synch with his designs and how to sell them, so unable to process complex human empathy. He’s flanked by longtime stalwart marketing head Joanna Hoffman (Kate Winslet) – and yes, apparently her accent really is that all over the map. Other recurring appearances come from Steve Wozniak (a terrific Seth Rogen), Andy Hertzfeld (the ever strong Michael Stuhlbarg), former Apple CEO John Sculley (Sorkin veteran Jeff Daniels), estranged partner Chrisann Brennan (Katherine Waterston) and his estranged daughter Lisa, played at three different ages by Makenzie Moss, Ripley Sobo and Perla Haney-Jardine.

Offscreen, cinematographer Alwin Küchler shoots the three acts on three different stocks: 16mm for 1984, 35mm for 1988 and digital for 1998 – yet another subtly glorious touch, while Daniel Pemberton’s score is one of the year’s best.

Like an Apple product, STEVE JOBS is almost perfectly made and packaged, yet it simply won’t be to everybody’s taste – but fans are going to love it.