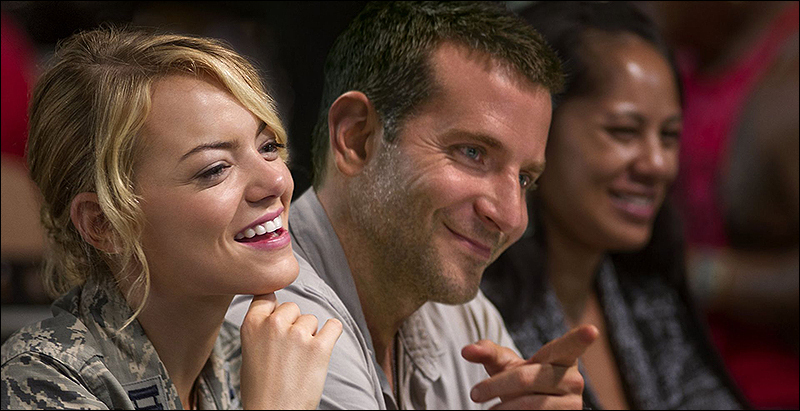 Cameron Crowe’s filmography hasn’t been having a very good decade. Actually, depending on your opinion of VANILLA SKY (I don’t mind it – many did), and discounting music documentaries made from having 20 years worth of priceless footage duped in your lap, it hasn’t been having a good millennium. The director has been in need of something simple and solid to get him back on sure footing, ala Jon Favreau’s CHEF. Sadly, ALOHA is not that movie, despite an impressive cast.

Brian Gilcrest (Bradley Cooper) is an ex-army boy turned ‘consultant’ for the US defense forces. He’s been brought back to his home in Hawaii to earn his way back into the good graces of billionaire space nut Carson Welch (Bill Murray) by negotiating a land grab from the locals (Dennis ‘Bumpy’ Kanahele plays himself) on behalf of the US DOD. Assigned to assist him is the spritely, precise and upbeat USAF pilot Allison Ng (Emma Stone). Meanwhile Brian’s ex-girlfriend Tracy (Rachel McAdams) still lives on the island with her husband (John Krasinski) and their two kids.

ALOHA has already come in for a kicking for its marginalisation of indigenous Hawaiian culture – and deservedly so - but let’s take that as read, and focus on its other most egregious flaw: the screenplay. It’s a hot mess, and if it didn’t have Crowe’s name on the title page it would never been greenlit. It’s like he set out to fuse LOCAL HERO and THE DESCENDANTS (not a bad idea in itself), but then the night before shooting had a Netflix double of THE RIGHT STUFF and THE HURT LOCKER, and crammed those elements in on the fly. God knows what the shoot was like, but I can guarantee you by the time editing came around people were panicking, slashing and burning; the result is every bit as uneven and jarring as you could expect – gaping holes and unfollowed-up plot threads, characters we're not sure we should like or forgive, facepalm-inducing “WTF?!” contrivances (including a late action sequence where Brian displays mad skillz that haven't been so much as mentioned until that point) and a tone as unstable as the volcanoes it all takes place on.

But among the calamity and infuriating errors of judgement, there are fragments that do work. Not nearly enough of them, but they’re in there. Almost without exception these are drawn from the abilities and comic timing of ALOHA’s stars, and their in-built audience goodwill - Murray and Stone are the most obvious examples, but also a restrained Danny McBride, and Krasinski’s almost silent performance provides the most interesting and enjoyable scenes of the entire piece. Cooper meanwhile has to use every ounce of his charisma in trying to win the audience over to his essentially rather despicable (ex-Iraq war mercenary and profiteer looking for a third chance) character. His success in this will be very much down to the individual.

With the world’s pitchforks already out for it (already one of the most derided films of the year, it’ll doubtless it will go on to win every Razzie going, unless their favourite whipping boy Michael Bay has so much as a finger in any film between now and awards season), it’s important to remember that there’s a smidgen of crazy courage in ALOHA – it may be an excited puppy of a film, wildly chasing whichever ideas it feels like in any given moment, but it least it has some promising ideas to chase, which automatically puts it several steps up from the soft, saccharine shite that was WE BOUGHT A ZOO. So on the bright side, Crowe is slowly improving.

ALOHA is released May 29 in the US, June 4 in Australia and NZ, and September 4 in the UK