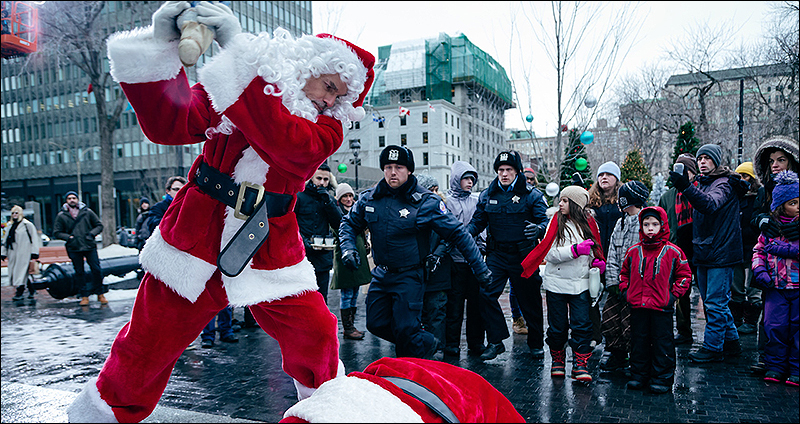 Many of us never thought we’d get to see any more of Billy Bob Thornton’s Willie Soke. The misanthropic, alcoholic, part-time Santa/full time safe-cracker’s story seemed pretty much done by the time the credits rolled on his first piss-stained, profanity-and-bum-sex-filled story. But that story was a runaway hit, and if there’s one thing more reliable than a Christmas wish to get fans a sequel, it’s box office returns - no matter how far down the line.

So here we are, more than a decade later, and we quickly learn that in the interim, life has once again been unkind to Willie. Things are so bad that severely estranged partner in crime Marcus (Tony Cox) manages to lure him to work one – presumably last - giant score in Chicago, ripping off a Christmas charity run by Diane Hastings (Christina Hendricks) and her dodgy husband. Meanwhile, the now spectrum-placed Thurman Merman (Brett Kelly) is still somehow following Willie around like the one puppy the thief can’t bring himself to kick, and we’re introduced to the heist’s mastermind: Willie’s own mother (Kathy Bates).

It’s this angle that BAD SANTA 2 uses to explore new ground, and prevent it from being just a photocopy of the first film (but without the colossal, much missed talents of Bernie Mac and John Ritter). What and who made Willie the way he is? For the most part this works, thanks to the typically committed sparring between Thornton and the ever-reliable Bates giving everything to her unscrupulous character.

Less successful is the look of the film – it’s so damned dark. As in literally dark. The first film had its pitch-black antics play out against the sunny climes of Phoenix, but here we’re in mostly night and occasionally grey murk of a Chicago winter – even the lion’s share of the interiors are a homeless hostel and a roach motel, which begins to feel just a little too much. Director Mark Waters (MEAN GIRLS) attempts to counter this in the third act by again spotlighting the one unextinguished ember of humanity in Willie, but it feels a little heavy handed after Terry Zwigoff’s deft touch in the first film of that simple, stuffed pink elephant (which cameos here). Pleasingly though, the sulphurous barbs and insults – both verbal and physical - are all still present and very much accounted for, even if they’re wrapped in a messy plot.

Maybe if it wasn’t carrying the weight of expectations from its predecessor, we would be a bit more forgiving of BAD SANTA 2; it’s good for a naughty giggle, even if it’s not everything fans wished for. But then again, any BAD SANTA fan can quote you Willie’s line on wishing…

BAD SANTA 2 is released November 23 in the US and UK, and November 24 in Australia and NZ.