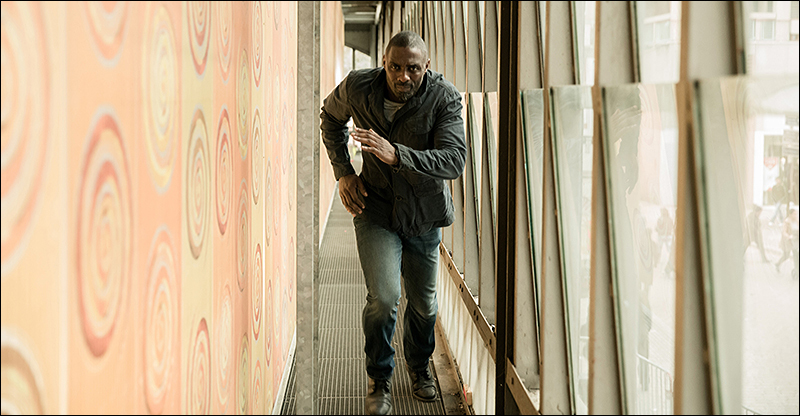 Despite the obvious unfortunate timing for a film set in Paris involving terrorism, James Watkins’ BASTILLE DAY seems like an exciting proposition on paper. Watkins has enjoyed a reputation for making the most out of his projects – both EDEN LAKE and THE WOMAN IN BLACK were pleasant genre surprises full of smart choices, so this modestly budgeted Bourne-a-like could easily have been expected to follow suit.

Sadly that’s turned out not to be the case, and even the mighty shoulders of Idris Elba can’t prop up a too-daft, heard-it-all-before script. Richard Madden’s down on his luck pickpocket catches the attention of Elba’s CIA agent when the thief steals the wrong bag, which contains a bomb that was supposed to be planted in the offices of a right wing political party by an unwilling novice extremist (Charlotte LeBon), who lost her bottle when she discovered innocent cleaners were still in the building. The blast instead occurs in public, creating carnage and chaos for all sides.

It’s a promising start, but despite a pacey running time, BASTILLE DAY gradually dissolves into inanity. Watkins shares writing credit with Andrew Baldwin (who clearly wrote this as an audition piece for his forthcoming Jeremy Renner Bourne spinoff sequel), but it lacks any of the ingenuity of Watkins’ earlier screenplays; his main achievements here are as director, where he does at least manage to notch up some impressive set pieces (bringing a few new tricks to the ‘rooftop chase’ and ‘fight in the back of a moving vehicle’ staples), even if film’s connective tissue remains lacking.

Elba acquits himself perfectly well, even though he’s way above the material here, and doesn’t really need to prove his action credentials (maybe the promise of allowing him to sing the theme song over the end credits was the appeal?), but he’s hindered by a wooden Madden, who just can’t bring any energy to what should be a supremely charismatic character. Le Bon is fine, while Kelly Reilly dutifully fulfills a thankless expositional role.

It’s tight, it’s punchy, and it doesn’t drag on – if BASTILLE DAY could just have been smarter, we could have been looking at a minor classic, but it is lacking less than je ne sais quoi.

BASTILLE DAY is released April 22 in the UK, and May 12 in Australia and NZ.