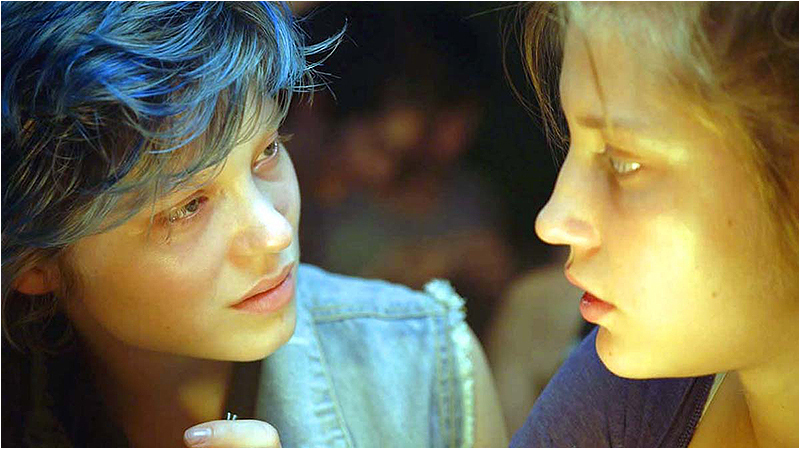 There’s a scene that crystalises the problems of BLUE IS THE WARMEST COLOUR, the controversial Palm d’Or winner at 2013’s Cannes Film Festival - yes, it’s the much-talked about (and, by its cast and director, publicly argued-over) sex scene.

17 year old Adèle (Adèle Exarchopoulos) has come to terms with her own homosexuality, and has fallen in love with the older, blue-haired, free spirited artist Emma (Léa Seydoux). They make love, and it’s everything either of them hoped it would be. Just to make sure we get the message, director Abdellatif Kechiche spends eleven minutes to showing it to us.

Irrespective of the rather creepy, leery gaze he applies to this scene - cold cuts of the couple enjoying a series of sexual positions – it just goes on and on… and on, without adding anything new to what’s already been achieved by its first few minutes. It’s indicative of the movie as a whole, which with a bloated three-hour duration, could easily be cut down by a good 30 – 40 minutes.

A clue to BLUE IS THE WARMEST COLOUR’s almost interminable running time may lie in its original French title – THE LIFE OF ADÈLE, CHAPTERS ONE AND TWO [my translation]. Was this adaptation of Julie Maroh's comic intended to be two shorter films made as the start of a series for television? I don’t know, but for my money its current form is a drawn-out mistake.

It’s a particular shame because aside from all the tedious padding (and that one instance of ‘pervy-cam’), there is so much to like. The two central performances are devastatingly honest, particularly Exarchopoulos’ journey from mucky, awkward teenager to wiser twenty-something, and Adèle’s journey is an interesting one, if only it could have been more judiciously edited – particularly to exclude the relentless, snotty sobbing.

BLUE IS THE WARMEST COLOUR is released February 13 in Australia and New Zealand.