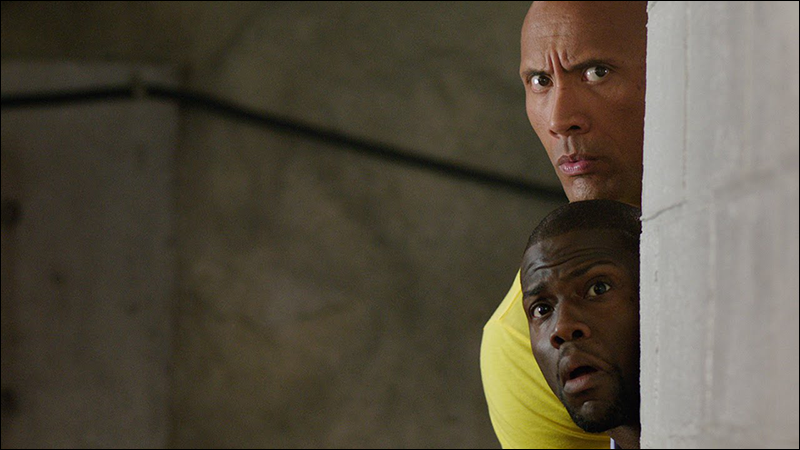 Filmmakers seem to be having difficulty cutting their films to Kevin Hart’s performance rhythms. He’s clearly a funny guy, but something was off-kilter about the recent RIDE ALONG 2, and now we have similar problems in CENTRAL INTELLIGENCE. It’s not a film-swallowing crisis by any means, but it does seem to be doing the comedian something of a disservice.

Hart is Calvin Joyner, a man only too aware that his life peaked in high school. He was also the only one who was nice to obese bully-magnet Robbie Wheirdict (Dwayne Johnson). Just prior to their 20 year reunion, Robbie contacts with Calvin. He's changed his name to Stone and, well, metamorphasised in Dwayne Johnson. He's also an undercover agent for the CIA, and he now needs Calvin’s help to find a ne'rdowell he calls 'The Black Badger', while avoiding his own side who think he’s gone rogue.

The lines are frequently funny (and there's a god serve of them), but the timing is just a little… off, suggesting that many of the scenes were improvised under multiple cameras and had difficulty keeping pace with the performers.

Johnson meanwhile once again proves himself a more than able comic with a willingness to take risks with his own persona. He inhabits Robbie with an interesting oddness; here is a guy who is still the same dork he was in high school, but now nobody dares mess with, and indeed many people want to be him.

The film around both men is far from a smooth ride, though. No-one - including director Rawson Marshall Thurber – seems too perturbed with a subplot involving the CIA torturing one of their own, only to find out they were barking up the wrong tree. This is simply apologised for and brushed aside, and for some reason it’s not even a joke. It’s a strange, uneven effort, one that has only just enough jokes and charm from its talented leads to cover its’ many holes.

CENTRAL INTELLIGENCE is released June 17 in the US, June 29 in the UK, and June 30 in Australia and New Zealand