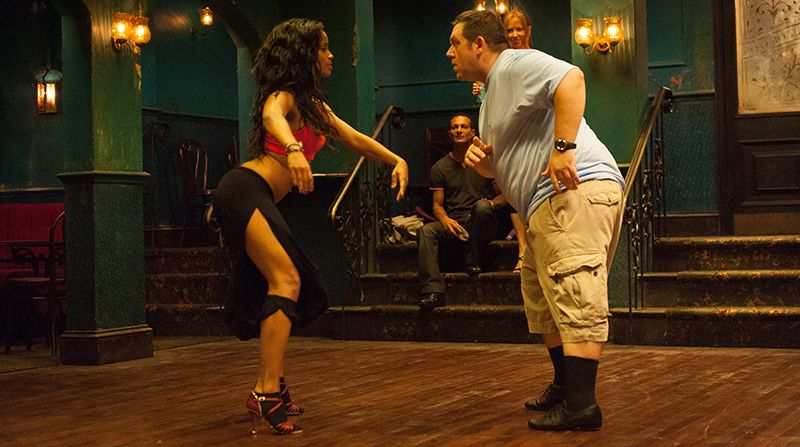 The ever-likeable Nick Frost (SHAUN OF THE DEAD) gets his first leading role in this British comedy as Bruce Garrett, a man whose dreams of being a Salsa dancing champion were literally kicked out of him during a particularly brutal childhood bullying incident. He retreated into his shell, and now leads a humdrum life, primarily plodding between trips to the driving range with equally unambitious mates, and the bar where his plucky sister (Olivia Colman) works. At work, he fails to challenge his revolting alpha male work colleague Drew (Chris O’Dowd) at any of his shenanigans. Did I say ‘shenanigans’? I meant ‘sexual harassment suits in waiting’.

Bruce’s outlook changes when new boss Julia (Rashida Jones) arrives, and re-ignites the last skerrick of kindling in Bruce’s heart – and under his heels – because wouldn’t you know it: she’s into Salsa. All Bruce has to do is overcome his fears, find his mojo and take his big chance.

For a story about passion and taking chances though, CUBAN FURY doesn’t exactly put its money where its mouth is - it’s a film more determined to stay within the lines than a six year old with a brand new colouring book. The question is: does it need to push against its template? The answer: not really – not when you’ve got genuine charm, lots of laughs and a brilliant cast (Ian McShane, Kayvan Novak, Rory Kinnear, Alexandra Roach) riffing on this simplest of formulas.

In an age when so much is expected of first time filmmakers (ie – if you want another shot, first turn a profit), you can hardly blame director James Griffiths and screenwriter Jon Brown for treading so timidly, and they at least get the details right: it’s unusual to see Frost, such a talented natural comedian, changing gears into the straight role, but he’s the right man for the job. Jones (from TV’s Parks & Recreation) is wonderfully warm, while O’Dowd is often hilariously sleazy (their inevitable dance-off is worth it).

You might not find a less daring film all year, but that’s certainly not to say it isn’t worthwhile. Like an old pair of dancing shoes, CUBAN FURY feels incredibly light and very familiar, but it's reliably made.

CUBAN FURY is released February 14 in the UK, March 20 in Australia and New Zealand, and May in the USA.