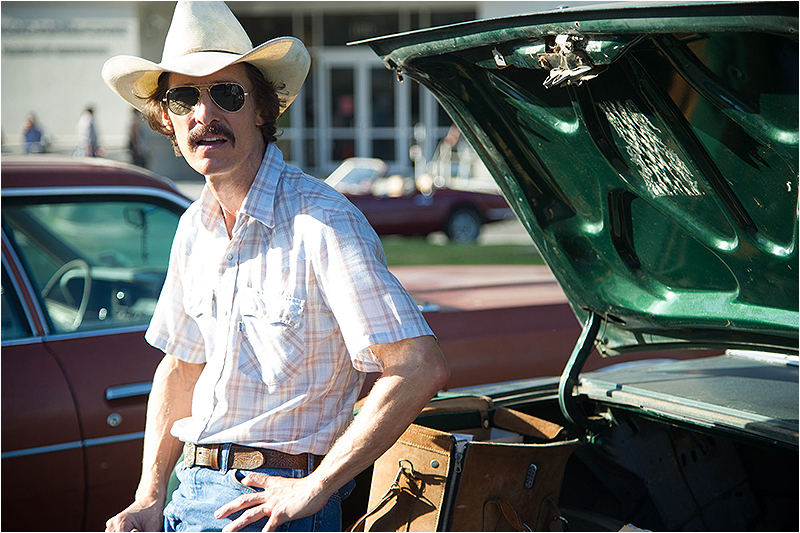 You can't help by now but to have noticed Matthew McConaughey’s hot streak – which stretches back to 2011’s BERNIE, through KILLER JOE, THE PAPERBOY, MUD, MAGIC MIKE, THE WOLF OF WALL STREET and into HBO’s True Detective - doesn’t looking like stopping any time soon (there are those who feel this is a new-found talent, but they're forgetting outstanding early work in the likes of DAZED & CONFUSED and LONE STAR).

In fact, before we see him next year in Christopher Nolan’s INTERSTELLAR, I’ll go so far as to put my money on him picking him up a Best Actor Oscar for his performance in DALLAS BUYERS CLUB, and even in 2014’s uncannily tough field, he deserves it. Forget the clichés of actors winning on the simple basis of physical transformation (McConaughey lost a lot of weight for the role), it’s his subtle, complex work here that makes him such a strong contender, and elevates Jean-Marc Vallée’s film from good to great.

Craig Borten and Melisa Wallack’s screenplay is layered with smart metaphors and nice flourishes, but at its heart it’s playing by all of rules – this is the old Hollywood ‘unlikely hero’ story we all know (and some of us love), and they’ve presented it very well.

Their representation of Ron Woodroof is that, until 1985 he was a Texan oil field electrician who loved rodeo, booze, drugs, sleeping with women two at a time, and was none too fond of gay folk. Then he was diagnosed with full-blown AIDS, and in his desperation to get his hands on medicine still being trialed by the FDA, found himself down in Mexico learning a lot more about his disease. It didn’t take long for the self-preserving Woodroof to figure out he could smuggle alternative, non-FDA approved/Big Pharma-produced medicines into the US and distribute them, become something an unlikely hero to Texas’ gay and transgender communities in the process. But that was just the beginning of Woodroof’s struggle…

The historical accuracy of Borten’s and Wallack’s script has been questioned by some (Woodroof was apparently not homophobic, nor a participant in rodeo), but they’ve made a very good piece of drama regardless. Likewise, Valée’s touch as a director is often subtle and restrained, with occasional beats of poetry (a moment with some exotic moths is a particular standout).

There’s also an excellent supporting cast at work, sometimes working with very little – as Woodroof’s doctor and later impossible object of affection, Jennifer Garner doesn’t have a lot to do (though she’s fine) and Steve Zahn is only around for a couple of scenes, but Kevin O’Neill (FDA guy), an almost unrecognizable Griffin Dunne (alternative medicine man) are solid, and of course Jared Leto doesn’t waste a moment of the film’s showiest role as Woodroof’s transgender business partner – and later close friend – Rayon.

But make no mistake, this is McConaughey’s show, and his work is utterly outstanding. Almost immediately you’ll forget about the actor’s shockingly gaunt frame, and remain focused on the character’s eyes, and observe what could be a series of gauche, grandstanding scenes reduced to elegance and finesse. This is a journeyman actor’s masterpiece, and long may he be remembered for it.

DALLAS BUYERS CLUB is released February 7 in the UK, February 13 in Australia and February 20 in New Zealand.