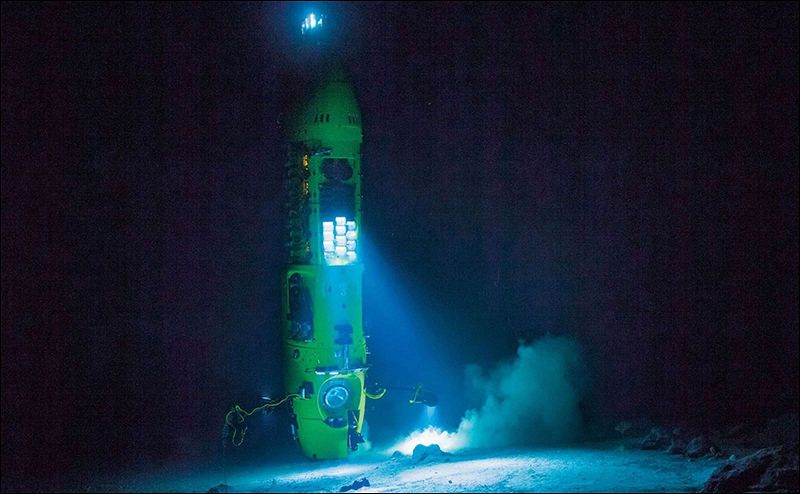 When he’s not creating some of the biggest movies of all time, James Cameron spends his days as a deep sea explorer; everyone needs a hobby, it’s just that his is interesting enough for National Geographic to follow him around while he does it.

Inspired as a kid by Jacques Cousteau and deep sea divers Jacques Piccard and Don Walsh, Cameron has always had a desire to explore the deepest known place on the planet: Challenger Deep, in the Pacific Ocean’s Mariana Trench. So what does he do? He designs and builds his own brand new diving vessel – with the extensive input from his hand-picked team of experts, of course - as you do.

DEEPSEA CHALLENGE 3D is very much about this journey – the construction and testing of the sub (against a deadline to catch the best weather conditions in the region) takes up the entire first half of the film, so there’s less of a focus on the actual undersea exploration / weird and wonderful critters etc. than you might expect, but that’s certainly not to say the film is without drama, tension, and above all a marvellous sense of wonder at genuinely pioneering invention and exploration.

It’s shot in 3D, which works better for some parts of the film than others: anything underwater, big thumbs up; boardroom meetings not so much, and during some of the sit-down interviews it felt like the separation was cranked too high. While it's still essential to see this in 3D, try and get a seat towards the rear of the auditorium.

One of the film’s greatest assets is Cameron himself: as a storyteller he understands - just like Cousteau did - the importance of sharing the adventure, and his ability to verbalise everything not only as it is happening to him in real time, but in language we can understand, is crucial. It’s particularly cool, for example, to hear him referencing the exact point at which he goes deeper than Bud Brigman (Ed Harris) in THE ABYSS. He's also dropped in one of the greatest bits of product placement we're likely to see in a documentary for quite some time.

Kids will go crazy for it, and even the most jaded adults will be able to find 90 minutes of solace from this pretty depressing point in world history; DEEPSEA CHALLENGE 3D is a refreshing celebration of humankind’s ability to do still some things that are pure and good, and a demonstration of how we should be applying ourselves.

DEEPSEA CHALLENGE 3D is released August 8 in the US, and August 21 in Australia.