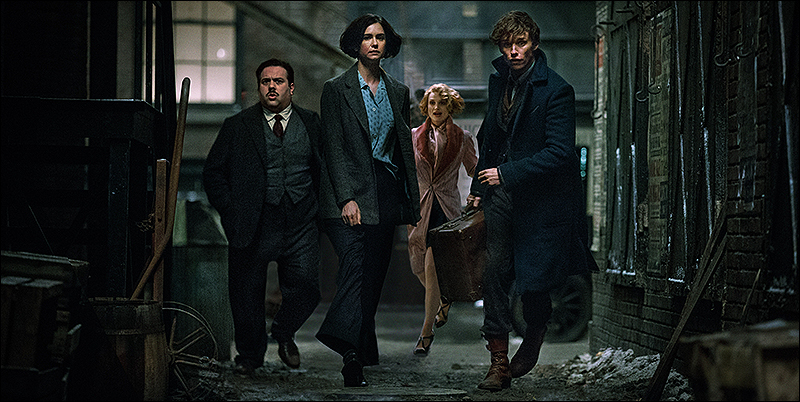 The first of the inevitable spinoffs from the Harry Potter saga moves the action to 1920’s New York. From the immigration queues, we follow visiting English wizard and magizoologist Newt Scamander (Eddie Redmayne) and his efforts to save endangered magical creatures. Or at least half of FANTASTIC BEASTS does. The other half concerns itself with setting up the other four projected films in this series, complete with another worrying, unseen dark force on the rise.

Redmayne brings  almost elf-like delicacy to Newt, while Dan Fogel brings heartful support as down on his luck no-maj (as muggles are referred to across the pond) Jacob Kowalski, who becomes entangled in Newt’s adventure courtesy of a luggage mix-up.

Meanwhile, magical society in the US has its own governing body, MACUSA (Magical Congess of the Unisted States of America), whose head of security Percival Graves (Colin Farrell) takes a disconcerting interest in the affairs of the puritanically anti-magic Barebone family led by matriarch Mary Lou (Samantha Morton), but in particular her whipping boy son Credence (Ezra Miller).

David Yates returns as director (his fifth film in the Potterverse), and delivers an effort tangibly consistent with his previous work. J.K. Rowling, this time on board as screenwriter, continues to wear her influences on her sleeve: a TARDIS-like suitcase, and Magneto-esque motivations from some of the antagonists, which will serendipitously serve the sequels if Warner Brothers are prepared to dive into the obvious parallels between the dark events of the 1930s and the demagoguery we’ve witnessed in 2016.

For all of the set-up and developments in FANTASTIC BEASTS (and perhaps because of it), it often feels like there are protracted periods in the film where not much is actually happening. Despite it’s two-plus hours running time, we don’t really to get to know many of the supporting characters very well (and some of whom become very important to the third act). It’s an accomplished, well-oiled exercise in world-building, like a huge budget HBO series where you have to wait two years between episodes, but there’s not quite enough going on right here and now for the film to truly dazzle as a standalone piece.

FANTASTIC BEASTS AND WHERE TO FIND THEM is released November 17 in Australia and New Zealand, and November 18 in the US and UK