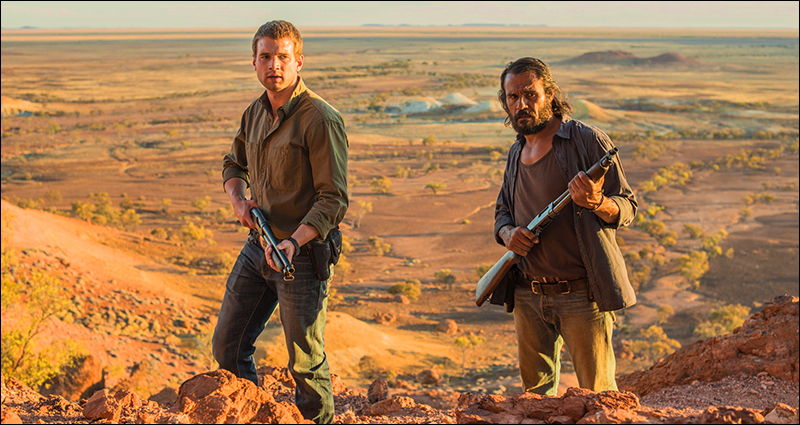 Aaron Pedersen returns as detective Jay Swan, and the intervening years since 2013’s MYSTERY ROAD haven’t been kind to him. He’s been sent to the titular, deeply isolated outback mining community (to call it a town would be overstating the case) to investigate the disappearance of a Chinese migrant, but soon finds more.

Almost immediately, he’s locking horns with Josh (Alex Russell), Goldstone’s local cop with problems of his own – the kind that get slid across desks in brown paper bags. Doing the sliding is Johnny (David Wenham), head honcho of the all-powerful mining operation, who needs some obstacles in the form of Aboriginal land rights (represented by David Gulpillil’s Jimmy, and Tommy Lewis as the head of the local indigenous land council) worked around – at any price, and he’s already got the whole-hearted support of Jacki Weaver’s local mayor Maureen (although exactly what she’s mayor of is anyone’s guess).

What makes it all so unnerving though, as Jay's and Josh's cases begin to inevitably coincide, is the palpable sense of isolation. This sequel's setting makes even MYSTERY ROAD’s township seem like a bustling metropolis – and it’s this which only strengthens GOLDSTONE’s ties to the Western. It may be the 21st century, but out here it’s still very much ‘anything goes’. There’s rule of law in theory, but if anything bad goes down, the cavalry's not getting here any time soon. More than that, private security forces have total sovereignty over their borders; the power of life and death over anyone who trespasses.

Writer/director/cinematographer/editor/composer Sen is at the top of his game here, barely putting a foot wrong in any of those key roles. GOLDSTONE carries over certain thematic shots central to MYSTERY ROAD's exceptional look (vast exteriors and God's eye view) and expands on them - the neon-soaked interiors are strikingly beautiful in their own right. His minimalist, atmospheric score is beautiful, and once again he finds a new and interesting way to film a shootout. His screenplay taps into a myriad of ugly undercurrents bubbling just beneath the surface of Australian culture (contemporary and historical), and it’s this area more than any other that GOLDSTONE outshines its predecessor. The conflicts extend beyond the obvious – white on black, black on black, white on white – and for the most part, they’re played out with delicious, noirish hints and allegories. As Jimmy sagely points out, “everyone who comes here ends up worshipping the same god.”

It’s not quite perfect – at least one minor character feels underused, while there’s occasionally too much(!) subtext beneath the interactions of main players, so that the superficialities of the scene feel unnatural/unbelievable. The most obvious minor oversight is in failing to sufficiently reign in Wenham’s penchant for over-egging his characters (in this case his VERY LOUD costume)*, but these are very minor misgivings against a very long list of achievements.

A supremely confident film from a filmmaker who has hit full stride, we rarely get half of what is served up in GOLDSTONE; to see it all wrapped so elegantly in such thrilling and engrossing genre entertainment is a mighty gift. Gripping from the first frame, this isn’t just Australia’s finest film of 2016, it's one of Australia's finest films.

* In fairness, I initially had similar feelings about Hugo Weaving’s character in MYSTERY ROAD which on repeat viewings I no longer have a problem with.

GOLDSTONE is released July 7 in Australia.