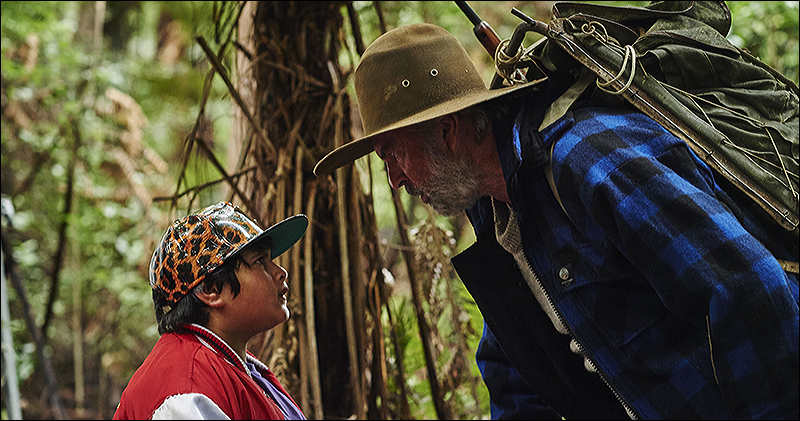 Writer/director/"third Conchord" Taika Waititi returns to the fertile comic territory ploughed so effectively by BOY and WHAT WE DO IN THE SHADOWS for this all ages adventure comedy, adapted from the legendary Kiwi author Barry Crump's novel. That territory is gang/gangsta life, and Waititi just can't stop laughing at the inherent absurdities of everything about it, especially when it's being emulated and idolised by the confused men of semi-rural New Zealand.

As she drops the thoroughly hip hop-outfitted Ricky Baker (Julian Dennison) off at his new home on a remote farm, child services officer Paula (Rachel House) informs fresh foster parent Bella (Rima Te Waita) that the 13 year old is "a real bad egg." She then goes on to list Ricky's dangerous qualities: "graffitiing, littering, smashing stuff, burning stuff, breaking stuff, stealing stuff, throwing rocks and running away." Clearly public enemy number one. Nevertheless, Bella is delighted to have him, even if her loner husband Hec (Sam Neill) isn't keen on company of any kind.

Soon enough though, a strange series of events will have the two males on the run together, hiding out in thousands of hectares of mountainous terrain, pursued by the relentless, petty Paula and a lot of cops. At first they're a bewilderment to one another, united by a common language but culturally poles apart, but of course the relationship warms, despite injuries, hunger, and the odd wild animal attack.

Once again, Waititi makes his gift for comedy seem effortless. As the chase escalates, the laughs continue to land often and accurately, mostly at the expense of Ricky's insistence that he is destined for the 'skux life.' His biggest win though, comes in finding a kid who can carry the film, and in that respect Dennison is a revelation, even when he's getting typically strong support from Neill, Rhys Darby as a nutty hermit, and even Waititi himself.

Though they feel similar, WILDERPEOPLE is a zanier film than BOY, and with its vaguely '80s retro vibe (though it's set in the present), all the better for it. Not all of the choices work, and it feels just a fraction overlong (breaking the narrative into chapters doesn't help), but otherwise it's a hundred or so of the more joyous and hilarious minutes you'll spend in a cinema this year. And no, you're not going to be able to get the birthday song out of your head for days.

HUNT FOR THE WILDERPEOPLE is released March 31 in NZ, May 26 in Australia, June 24 in the US and September 16 in the UK.