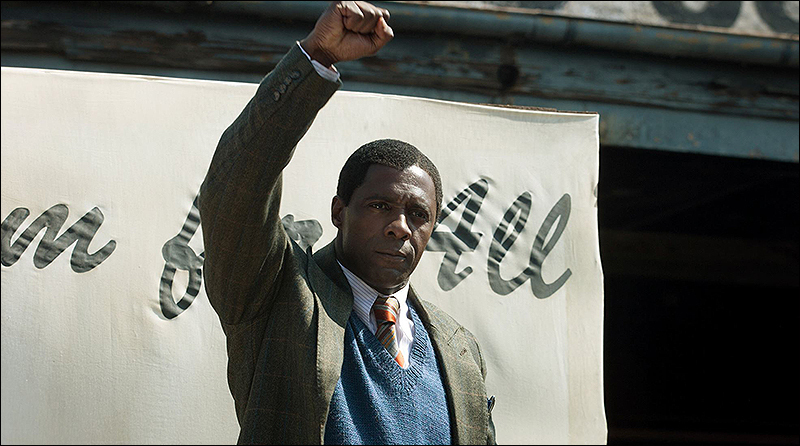 A biopic – essentially condensing down to under three hours the life and times of any person worthy of having their life story told on the big screen - is a tough proposition at the best of times. To do it for Nelson Mandela – not only the most (justly) lionized political figure of the 20th century, but a man who barely had an uneventful day in his 95 years of life – seems like the tallest of orders.

Kudos then to little known British director Justin Chadwick for taking up the mammoth – and frankly daunting – undertaking, and for doing his subject no disgrace in crafting (along with his crew) as honest a representation as you could hope for from a Hollywood feature film.

The responsibility of portraying (tribal name) Madeba on screen landed with Idris Elba (TV’s The Wire and Luther, and most recently PACIFIC RIM), who does an admirable job reflecting the changing man through three main phases of his life – activist/terrorist, prisoner, and statesman. Equally powerful is Naomie Harris (SKYFALL, 28 DAYS LATER) as his second wife Winnie, who had at least as hard a time in prison as her husband and eventually followed a different path.

There will always be the feeling that Mandela’s life was bigger than a feature film could ever do justice, and a key shortcoming of LONG WALK TO FREEDOM is that it feels like speed-reading (if ever a life story was suited to high-end, long form television series format, Mandela’s is it), but considering its constraints – and thanks in no small part to its two wonderful central performances – Chadwick’s film often treads an honest path, rarely straying into melodrama or deifying the subject.

MANDELA: LONG WALK TO FREEDOM is released January 30 in New Zealand, and February 6th in Australia.