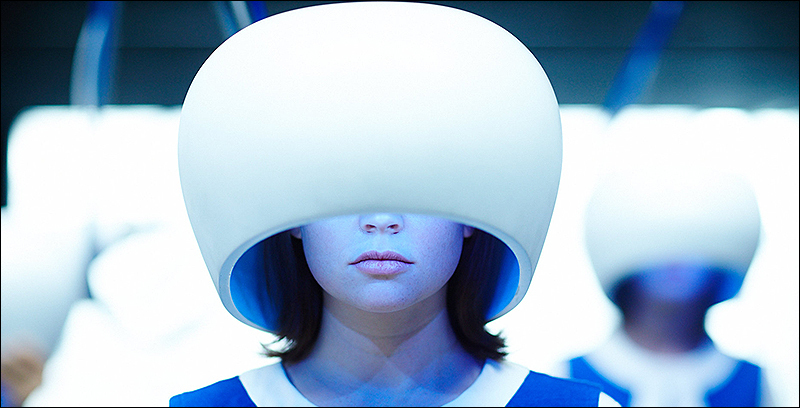 First up, full disclosure: I’ve been friends with Australian filmmakers Peter and Michael Spierig for several years, which means that moments like this could be tough if their movie had been rubbish. As it is, I’m only in danger of looking like a kiss-ass because their third feature, time travel sci-fi thriller PREDESTINATION is so bloody good... well go and see it if you don't believe me! Go on! Prove me wrong!

First of all, let’s dispel any reservations you may have developed from watching what was frankly a pretty ordinary trailer: this is not the INCEPTION/MINORITY REPORT-lite that [presumably Australian distributors Pinnacle - do please correct me if I'm mistaken] are selling it as. This is smart, tightly–wound, complex and above all originally-styled storytelling with plenty of groovy ideas, making PREDESTINATION very much its own beast. (Side note for time travel geeks: it adheres perfectly to the theoretical science of the subject, placing it in the rarified company of TWELVE MONKEYS, TIMECRIMES and very few others... LOOPER, I'm looking in your direction...)

The writer/director Spierig brothers have adapted Robert A. Heinlen’s short story All You Zombies*, and reteamed with Ethan Hawke (following DAYBREAKERS), casting him as a US government ‘Temporal Agent’ on the hunt for a particularly cunning domestic terrorist, dubbed the Fizzle Bomber. After a close but disfiguring call, he’s back on the trail in 1970s, undercover as a bartender. He meets a stranger with a hell of a story to tell, but that’s literally not the half of it, and as the plot zooms in and out like a fractal illusion, the less you know going in the better.

Hawke remains one cinema's great quiet achievers, and here he's as dependable as ever. He has fine support in Noah Taylor (GAME OF THRONES) as the ever-mysterious head of the Temporal Agency, but they're both matched by relative newcomer Sarah Snook (already the best thing about NOT SUITABLE FOR CHILDREN and recognisable from her recent brief, firebrand turn in THESE FINAL HOURS), who delivers a star-making performance as the exceptional, multi-layered Jane.

The abundance of hard work and risk that’s been invested behind the camera is obvious, and it’s paid huge dividends. Ben Nott’s noir-infused cinematography, Matthew Putland’s period-hopping production design, and some superb make-up from Steve Boyle and his team all elevate what could have been a disaster into a triumph.

The beauty of PREDESTINATION is that it has enough pieces in its puzzle to keep you interested all the way to the end, at once doubling-down on its impeccable internal logic, but also requiring just enough suspension of disbelief to keep it fun. It has the sense and temperance not to treat every twist and reveal like it’s ‘the big one’ and, like the cinematic equivalent of looking at a chicken wire fence for too long, it’ll knot the left and right sides of your brain as you try to figure it all out ahead of time. Of course, you just might - but in the tradition of the best pulp fiction, the whys and wherefores are expertly saved for the final moments. This is career-risking cinema from the Spierigs, requiring steady nerves and steadier heads, but they’ve succeeded admirably. They should be proud - I certainly am.

*does not contain zombies in any traditional sense.

PREDESTINATION is released August 28 in Australia, September 11 in New Zealand. Other territories TBC.