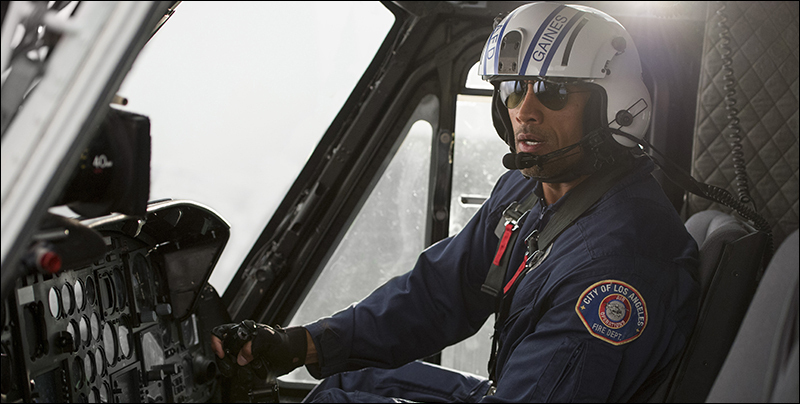 Given the huge box office success of EARTHQUAKE (third highest grossing film of 1974, yet forever in the shadow of the same year’s THE TOWERING INFERNO), it’s something of a mystery why Hollywood has taken so long to return to the fault line beneath it for inspiration. Even among the CG-driven ‘second wave’ of disaster flicks in the ‘90s and ‘00s (INDEPENDENCE DAY, VOLCANO, DANTE’S PEAK, THE DAY AFTER TOMORROW etc.), the ground remained largely intact. We need wonder no more of course, but even now it’s taken the colossal star power of Dwayne Johnson to crack it back open. (Yes I sidestepped the ‘Rock’ pun.)

Reteaming with his JOURNEY 2: THE MYSTERIOUS ISLAND director Brad Peyton for this bigger, weightier action spectacular, Johnson is California Fire & Rescue Captain Ray Gaines. It should go without saying that Ray is exceptionally good at his job. In his downtime he wants to be driving his daughter Blake (Alexandria Daddario) from L.A. to college in San Francisco, but a quake in neighbouring Nevada puts him back at work. Blake is instead flown upstate by her skyscraper-erecting, soon-to-be stepfather Daniel (Ioan Guffudd).

Meanwhile, the Nevada quake has been studied by Professor Lawrence (Paul Giamatti), and it has given him the acumen to determine that California is about to break like a Saltine cracker - beginning with L.A. and ending at San Fran. But it’s already started, and as Lawrence struggles to get the message out , Ray sets out on a mission through the carnage to bring his fractured family back together as everything else falls apart.

It’s best not to get too bogged down in the details – plot or politics - of a movie like SAN ANDREAS at the best of times, and sure - nitpickers will have a field day (how exactly did Ray get his helicopter back out of that gorge? And why is he allowed to do basically whatever he wants with a taxpayer-owned helicopter while there’s a national emergency going on?), but let’s be honest – it’s not why we’re here.

We’re here for spectacle, and on this front, Peyton and his team deliver. Among the visual effects shots and sequences we’ve become accustomed to (lengthy, unbroken follow shot behind a character fleeing chaos and debris; supporting object falls away beneath a character holding on to a cable clasped at the last second; skyscraper across the street falls from the view of the skyscraper we’re in), SAN ANDREAS ratchets up a few stylistic signature shots of its own, most gloriously when it pulls back and goes wide – real wide – above and behind Ray's helicopter, showing an entire city undulating like a city-sized bedspread being shaken out, or from sea level, facing the inevitable tsunami that follows. It’s old school 3D camerawork, and it still works beautifully – all of course aided by a thunderous sound mix.

With so much visual action pelting our eyes, Peyton wisely bucks the trend of disaster movies past, opting for a simpler story uncluttered by too many characters. Apart from cutting to Giamatti’s Professor Exposition (and boy does he get the short end of what’s already a pretty short dialogue stick), we never stray far from the Gaines family, and anyone not sticking with them is a barely more than a character sketch. It gives better time for their backstory among the bombast, and it works. One particular scene - quiet, calm and in the film’s middle between Ray and his soon-to-be-ex-wife Emma (Carla Gugino) is gently, genuinely affecting; had he ever needed one, it would be on Johnson’s audition reel. Daddario too is allowed moments to be more than unfairly beautiful, giving Blake energy and resourcefulness as she shepherds two English brothers, twenty-something Ben (Hugo Johnstone-Burt) and pre-teen Ollie (Art Parkinson) to the less obvious, safest ‘plan B’ she’s been taught to find. On the downside, there’s really no deviation in Ray’s patriarch hero from the tried and trusted pedigree of Heston and Schwarzenegger, and there was certainly room for it.

SAN ANDREAS is released May 28 in Australia, New Zealand and the UK, May 29 in the US.