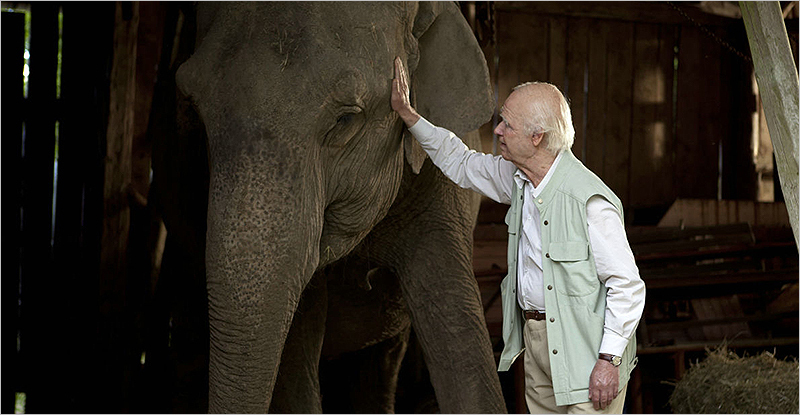 There’s something quite comforting in the fact that amongst all the Swedish movies and TV shows of knitware-clad detectives catching a seemingly endless array of ever-more demented serial killers, THE HUNDRED YEAR-OLD MAN WHO CLIMBED OUT THE WINDOW AND DISAPPEARED is the highest-grossing Swedish film of all time.

Okay, granted – no matter which way you cut it, no-one involved with the creation of that title has done themselves any favours. But… contrary to whatever preconceptions it may conjure up (at best it sounds like some sort of satire on a national health system, like a Scandinavian THE DEATH OF MR LAZARESCU), it turns out THE HUNDRED YEAR-OLD MAN… is a hoot: think equal parts THE GRAND BUDAPEST HOTEL (or if you've seen it, I SERVED THE KING OF ENGLAND) and SNATCH. A sort of LOCK, STOCK AND ONE EXPLODING SENIOR CITIZEN, if you like. I say exploding because the geezer in question just looooooves blowing stuff up.

We're talking about Allan Karlsson (Robert Gustafsson) who despite committing the titular act on the day of his centenary, will prove difficult to keep up with. He's bored with the nursing home he’s been placed in, and is happy to go literally anywhere else, so heads for nowhere in particular. He explains that he's never needed a plan, and begins his long, strange ‘shaggy dog’ life story, involving the Spanish revolution, the Manhattan project, the Cold War, several dictators and a shitload of dynamite - a bit like a less dim Forrest Gump with high explosives instead of rubbish platitudes. Life at 100 is no less chaotic: Allan’s latest adventure brings him into the orbit of a new and unlikely group of friends as well as a British gangster (Alan Ford playing to type), some white supremacists, fifty million Krona and a large, recently liberated circus elephant.

Madcap is certainly the word, but director Felix Herngren keeps the plates spinning nicely, keeping the pitch just whimsical and strange enough without getting too zany or sentimental (some of the humour is joyously dark). He also manages to reconcile all the pieces of a very well-cut puzzle (the hard yards pre-nutted out by Jonas Jonasson’s novel, I should think), with barely a hiccup. It's a light, surprisingly high-energy trip with a lot of laughs and just the right amount of poignancy.

THE HUNDRED YEAR-OLD MAN WHO CLIMBED OUT THE WINDOW AND DISAPPEARED is released July 4 in the UK and August 21 in Australia.