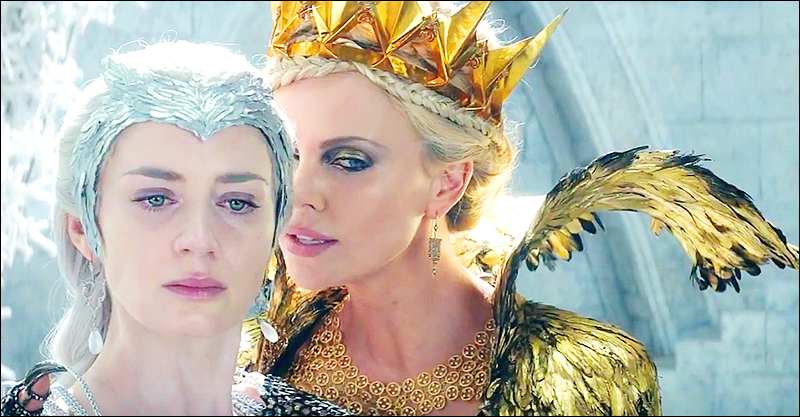 2012’s SNOW WHITE AND THE HUNTSMAN was one of those strange and curious blockbusters that, much like the recent BATMAN VS SUPERMAN: DAWN OF JUSTICE, managed to do exceptionally well at the box office despite most people having not much good to say about most of it. But rules is rules: if it makes money, it gets a sequel, so here we are with the essentially Snow White-less WINTER’S WAR.

The plot thickly bookends the first film; in the first act, before Snow White’s story, it’s revealed that the evil Ravenna (Charlize Theron) has a sister, Freya (Emily Blunt). Tragedy awakens her supernatural control of ice, and she leaves Rivenna’s domain for the North, establishing her own realm where she kidnaps kids and turns them into her army of cold-hearted warriors. Yes, WINTER’S WAR is essentially to FROZEN what Zack Snyder is to any DC Comics hero or heroine you care to name.

And like Snyder’s superhero mash-up, this makes for messy storytelling, equal parts confusing and ‘meh’, something about needing to get the mirror back. Chris Hemsworth, returning as the titular Huntsman, is clearly doing his damndest to inject some charm and warmth into proceedings, but is still having trouble with his Scots accent - although he fares better than Jessica Chastain; we’ll let you know what her dialect was when we get the results back from the lab. Nick Frost is the only returning dwarf, Nion, this time accompanied by the gruff Gryff (Rob Brydon), the sweet-natured Doreena (Alexandra Roach), and sweary highlight Mrs Bronwyn (Sheridan Smith).

There are a few plus points: some of the creature designs are excellent, and the cast - despite the unworthy material - don’t waste a thing. But Evan Spiliotopolous and Craig Mazin’s script is pish, and the fight scenes are the usual shot-too-close cluster bomb of over-editing that plagues current movies – director Cedric Nicolas-Troyan, (who served as visual effects director on the first film) while showing hints promise, still has a thing or two to learn about in-camera action.

THE HUNTSMAN: WINTER'S WAR is released April 4 in the UK, April 7 in Australia and NZ, and April 22 in the US.