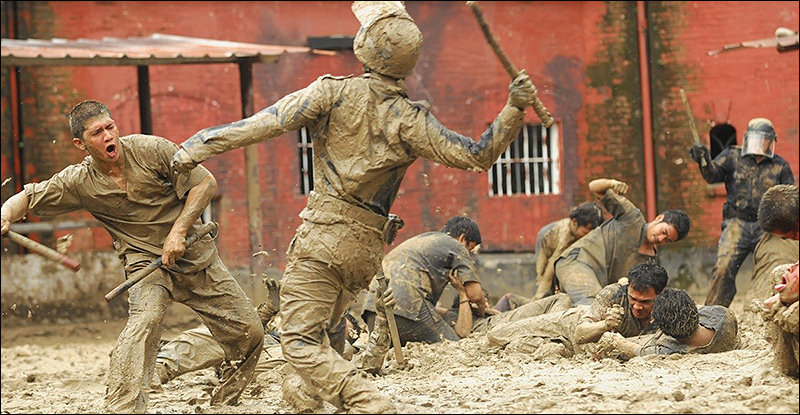 First thing’s first: you’re not going to see a better out-and-out action film this year. Truly, THE RAID 2 is excellent; head and shoulders above anything else in its genre - just buy your ticket now. Done? Okay…

It’s been three years since writer/director Gareth Evans unleashed THE RAID on a largely unsuspecting world. He’s been working on this sequel pretty much ever since, and he doesn’t appear to have wasted a second of that time. THE RAID 2 is certainly more ambitious and absolutely far bigger than its predecessor, but whether it is actually better is entirely up for discussion.

The first of the sequel’s huge set pieces turns out to be a very good barometer for what is to follow. A prison yard has been turned into a mud-pit by a monsoon, but that doesn’t stop about fifty men in two rival gangs from trying to kill each other in it. A small army of prison guards soon join the fray. It’s abject chaos; utter limb-snapping, stabby carnage. With mud caked all over them, we’ve very little idea of who is who or what they’re fighting for. Now this is presumably only intended as a metaphor for the story as a whole, but it’s also unfortunately fitting of what will soon become an over-burdened story. But dayum if it isn’t a huge buzz to watch in the moment.

What once again elevates Evans’ work above your average actioner is a magnificently sustained, genuine push at the boundaries of filmed fight choreography (which if you know even a little of this well-worn genre, you’ll appreciate is not nearly as easy as it seems), and he continues to do it with aplomb. No longer limited to fighting in corridors of a high-rise, the story has now spilled out into greater Jakarta; we fight in the mud, in nightclubs and restaurant kitchens, on trains, in cars moving at speed. The melees are every bit as punishing and intense as the first film, and again, often literally breathtaking. You can see the effort and hard graft in every sequence, and for that he deserves unlimited praise.

Admittedly, it’s not quite all hyperbole and skittles: the shaky-cam is this time just too much, feeling like a sneaky technical band-aid being written off as a stylistic choice. But as far as the action goes, that’s about the only criticism you can level at it.

Any of THE RAID 2’s problems only surface in the ‘other bits’ of the film, when it pauses for breath/builds its plot. Whereas its predecessor’s story can be described in a sentence (cops find themselves locked in a drug kingpin’s tower block and have to fight their way out), enabling a delicious, lean purity for the action to stand front and centre, with THE RAID 2 Evans expands the story to include a messy knot of higher-level gangsters, their henchmen and their rivals, as well as police corruption. It’s at times unnecessarily dense and over-populated with superfluous, not-terribly-sensical characters - some of whom feel crowbarred in quite late into the story - which inevitably creates pacing issues as the film goes on.

And go on it does - clocking in at 150 minutes, Evans has essentially created a 90 minute gangster film with a solid extra hour of pure, highest quality action stabbed into it at various brief intervals, rather than the beautifully streamlined moulding of the first film. It is a sequel weighed down by its own determination that bigger is better; measured against the pure-adrenalin economy of the first film, it feels just a bit overweight.

But you’re still not going to see a better action film all year.