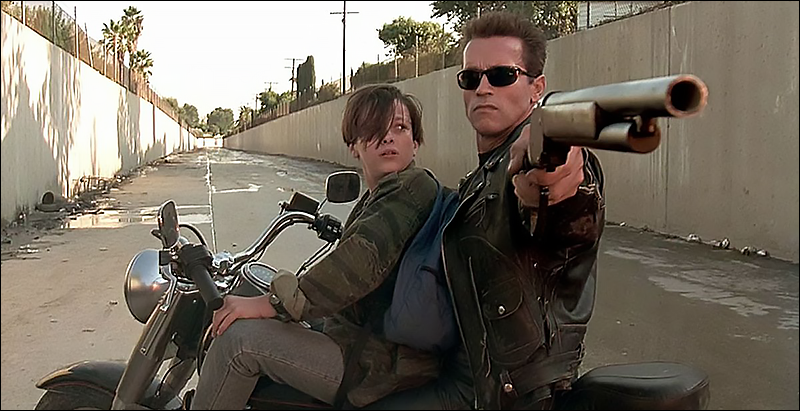 James Cameron’s gargantuan sequel blazed so many trails and set so many records on its release, it still requires virtually no introduction 26 years(!) later. Little surprise then that it’s been tuned up and turned out for the 3D treatment.

As with virtually everything Cameron puts his stamp on though, this is no mere gimmick. Anyone who remembers the film in any detail would consider that between its shooting style and the VFX technology of its time, T2 lends itself very kindly to stereoscope: looking through the hole in the head of Robert Patrick’s T-1000 at the characters who put the hole there; the truck crashing towards us through a bridge barrier, down into a storm drain; the T-1000 walking through a set of iron bars.

What’s surprising is the gentleness of the effect overall. As with TITANIC’s similar treatment a few years back, this is a very subtle remix – the objective (like the wise application of all visual effects) seems to be if not complete invisibility, at least to remain mostly unnoticed.

Elsewhere, there’s a few touch ups to the film itself – a hitherto notoriously visible stunt-double has been surrendered to CG mapping of Schwarzenegger’s face (although now I think of it, was this done for the IMAX re-release a few years back?), and doubtless the eagle-eyed will find some others upon future viewings. The print, despite now being a digital release, retains its pleasing celluloid grain, and the soundtrack (played at thunderous volume in my session) keeps a trebly ‘90s mix.

The film’s original tiny irritations will forever remain (Cameron’s tin-ear for anything but the hammiest of dialogue, poor Edward Furlong’s maddeningly breaking voice), but they’re really not worth mentioning against the generation-defining achievement that is EVERYTHING ELSE about the film. If you’ve never seen T2 on the big screen before, now’s your chance. And if you have, you know you're going again.