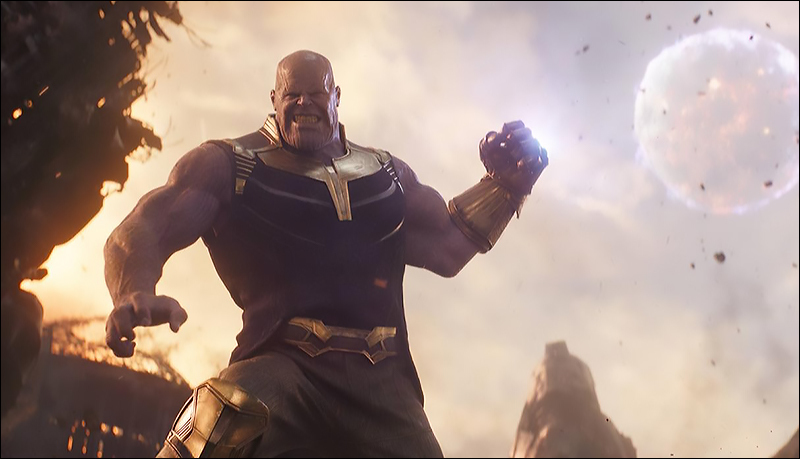 Ten years and 18 films into the Marvel Cinematic Universe has all been leading up to this: the second most anticipated movie of the 21st Century (and if you’ve forgotten the fever pitch for THE FORCE AWAKENS, you have a very short memory.)

Thanos (Josh Brolin), who has been signalling his imminent arrival since THE AVENGERS in 2012, is finally here. If you’ll remember his purpose for having Loki invade Earth (starting at New York) with an army of monsters in that point was to find a single Infinity Stone which had found its way on our planet. There are six of these gems, each containing immense power over an aspect of the universe’s existence, and Thanos wants to collect them all to put in his special Infinity Gauntlet and have power of life or death over every known thing. And while that first stone was taken off-world by Thor (Chris Hemsworth) at the end of THE AVENGERS, two more have since been revealed on our world – one sits around Dr Strange’s (Benedict Cumberbatch) neck the other is embedded in the bonce of Vision (Paul Bettany). Everybody got that? Good, because it’s just the tip of the iceberg. AVENGERS | INFINITY WAR clocks in at 149 minutes, and brings together the casts of nearly all previous MCU movies (and name checks the remaining few). Understandably then, it moves at a break-neck pace - it has to, and it barely pauses to see who’s remembered the important details from all earlier adventures across the nine realms and dozens of worlds.

You have to hand it to directors Anthony & Joe Russo – the task in front of them was monumental, but they and their team have handled it exceptionally well. The film’s greatest achievement isn’t necessarily to deliver the greatest story ever told (though it is wonderfully epic, wholly deserving of the biggest screen you can find), but to deliver the most entertaining movie they possibly could relative to the constraints in front of them. Think of the sheer logistics in bringing together not only the plots and disparate characters of ALL previous Marvel movies (many of whom haven’t met each other yet), but also the stylistic choices and design idiosyncrasies of each separate story, and having to merge them all into a smooth, coherent, entertaining-without-being-too-self-indulgent whole. Well, that’s what has been achieved here. Obviously Marvel has been putting a LOT of care and thought into this from the get-go, and they've enjoyed such monumental success so far you could try and argue that all they had to do was not get it wrong. But in filmmaking a huge step between planning and execution, and this could all so easily have gone screamingly tits-up; hats off to all involved for that simply not being the case, but major props for making it so bloody good.

As with all of these, it’s probably going to be easy to sit in future viewings and pic at plot threads, moments of rushed exposition and whatnot, but in the moment, INFINITY WAR works. Bouncing back and forth between three or more locations at any given time, it’s two and a half hours of breathless action. To say it never lets up would be a lie – I think it lets up once or twice. For about a minute. Then we’re back into the action, often unfolding in several places at once.

My greatest concern going into INFINITY WAR had always been Thanos himself. Marvel has notched some good wins recently thanks to interesting villains with a fair point of view (Michael Keaton’s Vulture in SPIDERMAN: HOMECOMING, and Michael B Jordan’s Killmonger in BLACK PANTHER being the two standouts), but their purple, scrotum-chinned big bad had always seemed a bit too disconcertingly vague. He’s brought quickly and sharply into focus here though: a lesson in economy of storytelling. How much do we really need to know about him? Not as much as you might think, it turns out.

Behind the camera, the work is second to none. The budget here is obviously much larger than the ‘individual adventure’ Marvel movies, and it shows in the finesse of the visuals – most easily noted in the improvement of the compositing of the Wakanda backgrounds*. I can’t think of a single shot that jars the eye (against for example that semi-trailer being flown out of shot in AGE OF ULTRON, which stuck out like dog's balls). The film also represents a wonderful amalgam of design styles – the Guardians, the Asgardians, the Wakandans, the world of Dr. Strange – everything merges smoothly, while of course the Iron Man and Spider-Man suits continue to evolve.

If you really want to get niggley, I’d say I can see the wheels turning just a fraction with the need for comic relief to diffuse the weight of the drama. The fallback to a funny line at the end of every heavy scene exposes itself as a device, and the Russo brothers (who have always seemed more comfortable with the darker tones of action storytelling) aren’t as deft as a Joss Whedon in making these joins invisible – or maybe it’s just unavoidable when every other character is a wise-cracking loose cannon? This is not to suggest the comedy doesn’t work: about 95% of it does, but I’m trying not to gush here.

INFINITY WAR may just be Marvel’s finest 2.5 hours to date; their GODFATHER PT.2, their EMPIRE STRIKES BACK, their DARK KNIGHT. Fans may believe the hype: it really is that good - and if you're not a fan by now, you really shouldn't be watching. This is a movie that achieves almost everything it sets out to, and make no mistake: that is a LOT.


*on a second viewing, I did notice some of the compositing in the Wakanda sequences (particularly the closer shots). I wonder why something so seemingly straightforward is an ongoing problem? If there's any techies out there who know, do feel free to explain in the comments section.

AVENGERS | INFINITY WAR is released April 25 in Australia and NZ, April 26 in the UK and April 27 in the US.

I've been reviewing and writing about films for 20 years, on and off. Most of that was with Empire magazine in the UK. Now I'm living in Adelaide, Australia.
Browse the Archive »